For ALL box shaped DIY RVs!

Now I have started to tear the box apart inside, 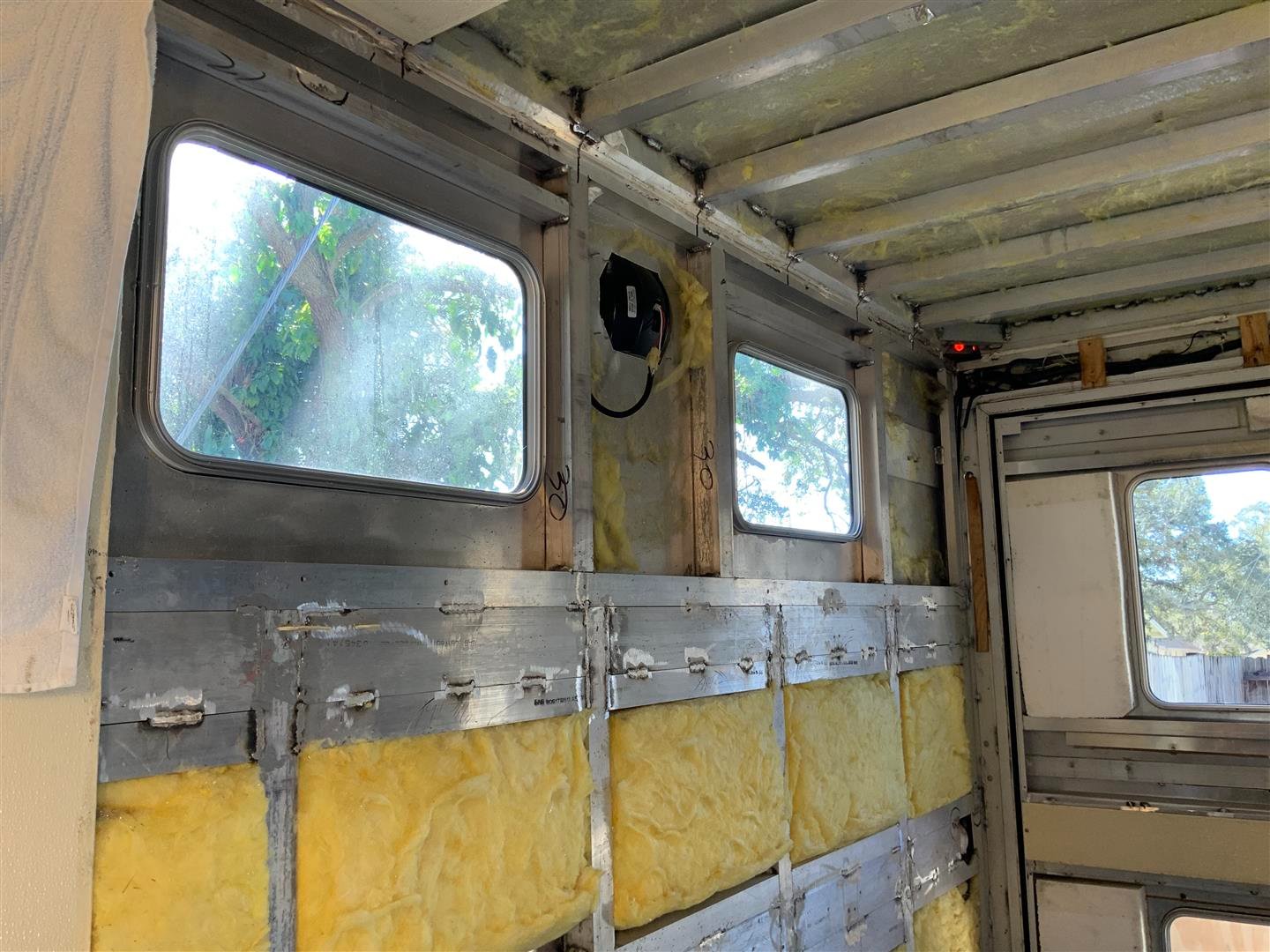 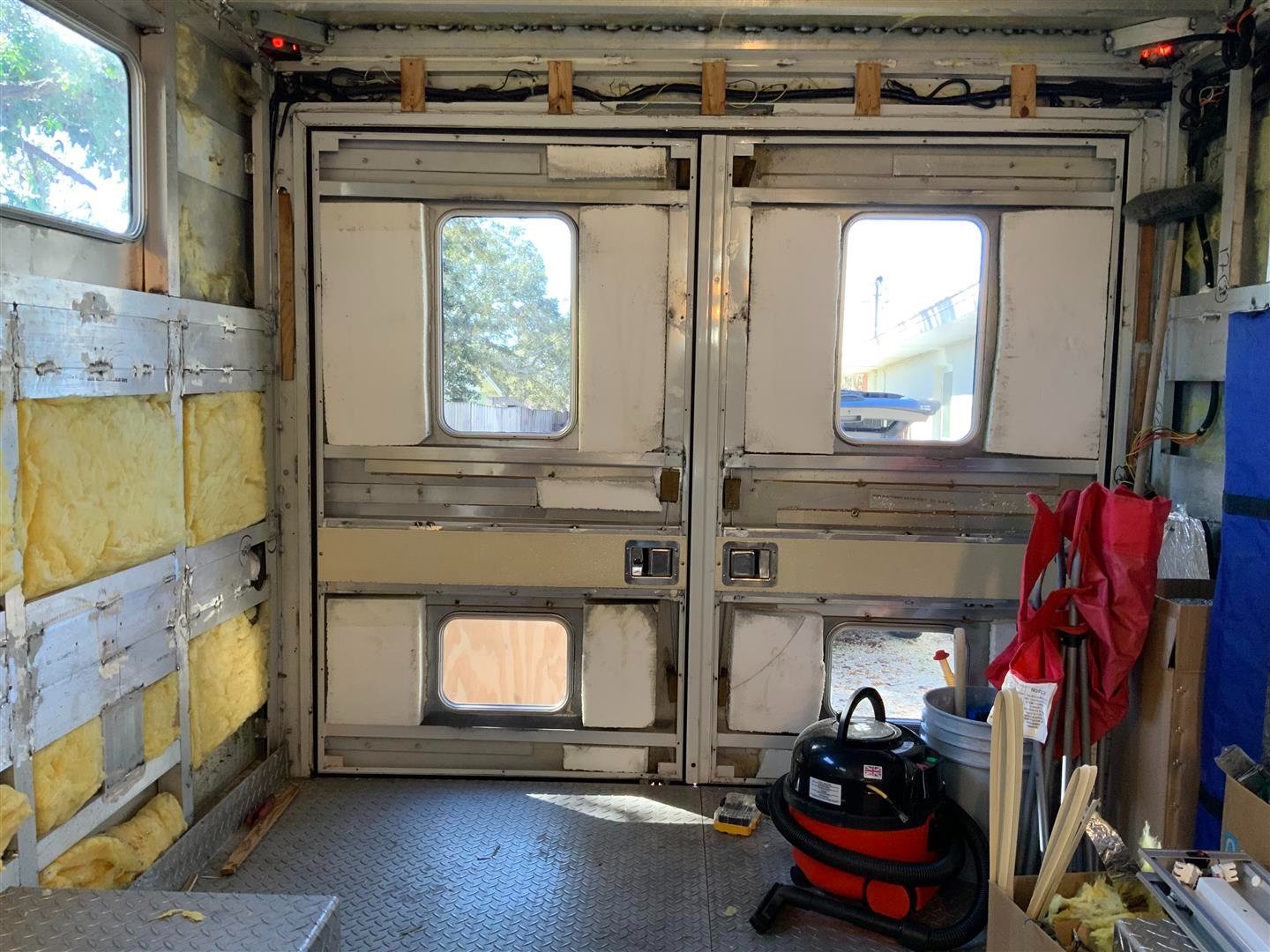 Have ordered some opening windows to replace the fixed glass ones, Skylight, awning, Max fans have arrived already.
Also ordered a door for the side of the box, currently there is no side door.
Now designing a roof rack & interior of the box.

Will keep you posted as it comes along.
Top

Are you doing an RV interior or more of a utilitarian look?

Are you keeping the mounting track on the walls?
Top

Thanks.. On the inside I'm planning on making it as comfortable and functional as I can, as the wife &I do plan on extensive time traveling, and we like our creature comforts.
As for the outside, it will probably lean towards utilitarian/overland, I will look into 4x4 when the interior is done.. if there is any money left for a 4x4 conversion.
As for the mounting track.. that is gone for now but I may reuse some of it for the cargo area at the rear, depending how my designs come out,
And also I may use some of it for hanging items on the exterior of the rear doors should I need.
Last edited by SunsetAmbo on Sun Aug 01, 2021 4:58 pm, edited 1 time in total.
Top

Hello.
I'm new to this.
I'm also in Florida.
Looking to buy an ambulance and go touring this summer.
Ty
For info.
Top

Hi. Welcome to the group, Keep up the search for your rig, It's a great feeling when it arrives and you can get started on your build.
Good luck.. Don't forget to do a build thread on here.
Top

Been a while since I have been able to spend time on the build..Or should i say rip out!

Back on it now...Next out is this base unit & then somehow get this electrical panel out of this wall unit with out removing all the cables..
The base unit is actually a half split!.. On the inside it's shelving, behind that is the box that is an external cupboard currently housing the spare wheel. 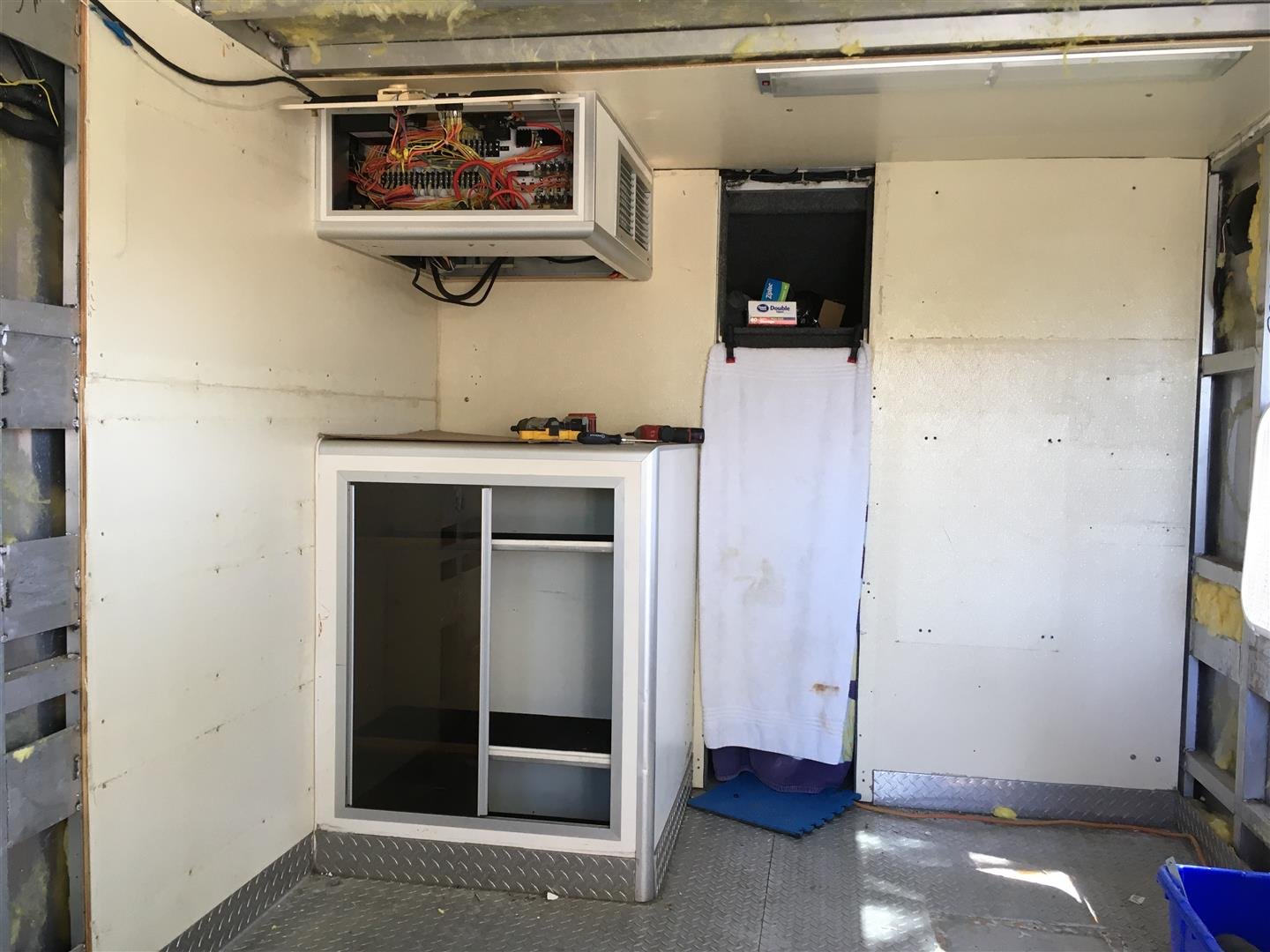 It came out fairly easy, exposing the electric panel & the AC unit which was mounted to ceiling behind the electric panel, Of which I unbolted and placed on the floor for now to get the last ceiling panel down.
In the end after much deliberation I decided to cut off the external box also as it was in the way for my build plan. 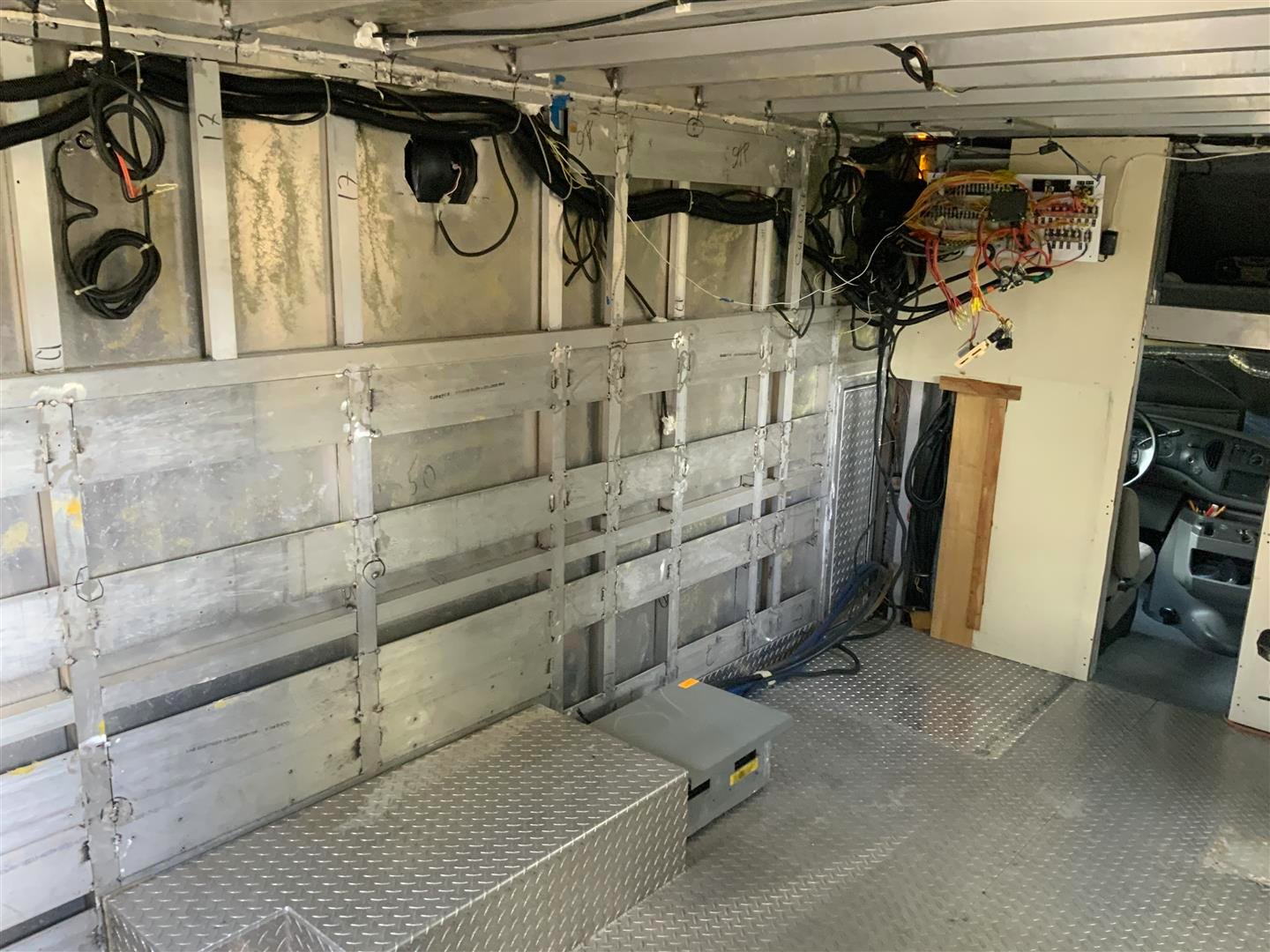 That completes the rip out!!
I'm keeping the wall panels between the cab & the box as I intend to build a heavy duty door dividing the box from the cab for security mainly.. Knowing ford locks! Someone might get in the cab but Hopefully wont get through the door to the back by the time I'm done with it) Also it will help to keep the box warm or cool at night if I can shut the cab off.
Last edited by SunsetAmbo on Sun Aug 01, 2021 6:27 pm, edited 3 times in total.
Top

Now I have a blank canvas.. 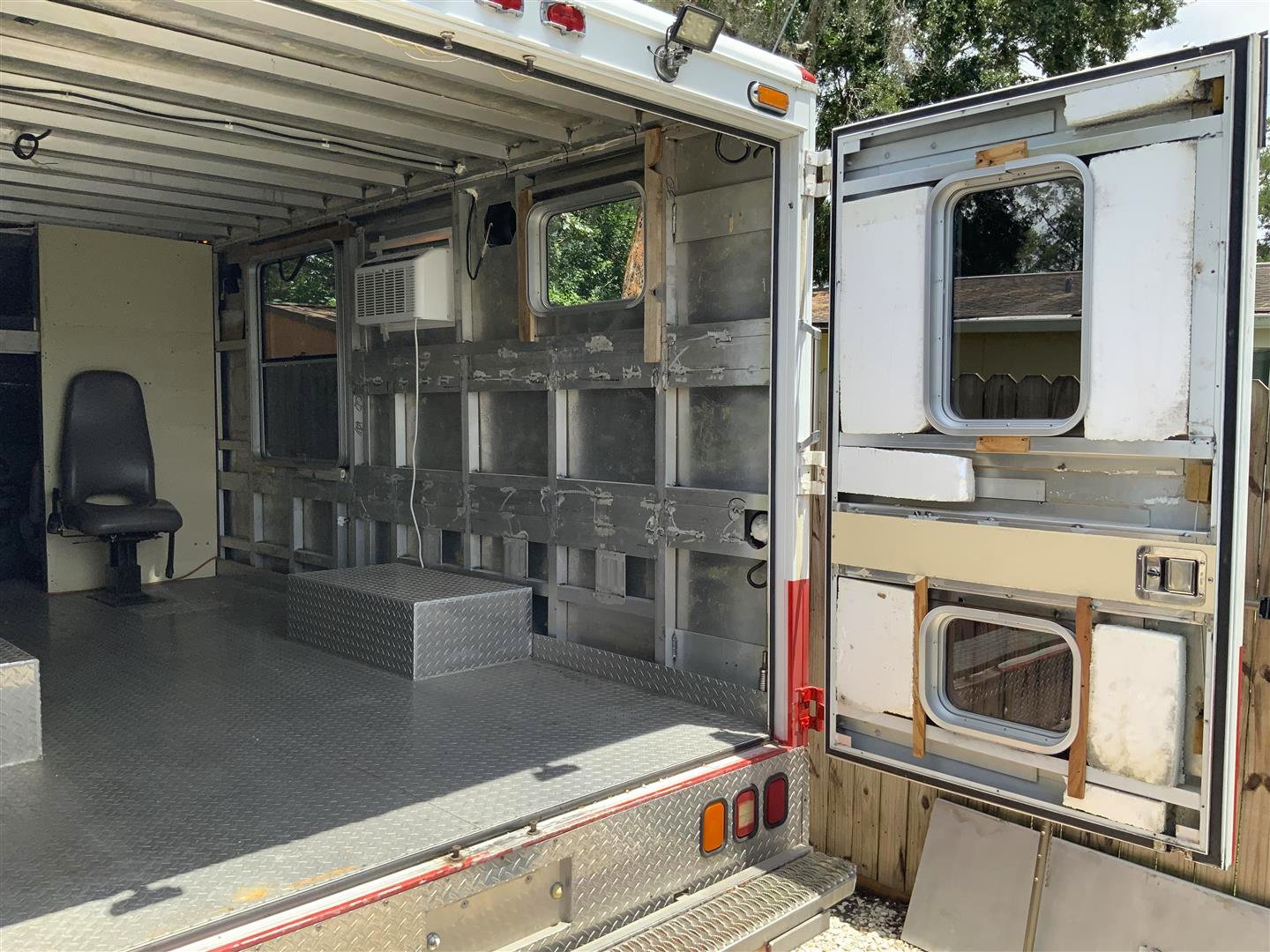 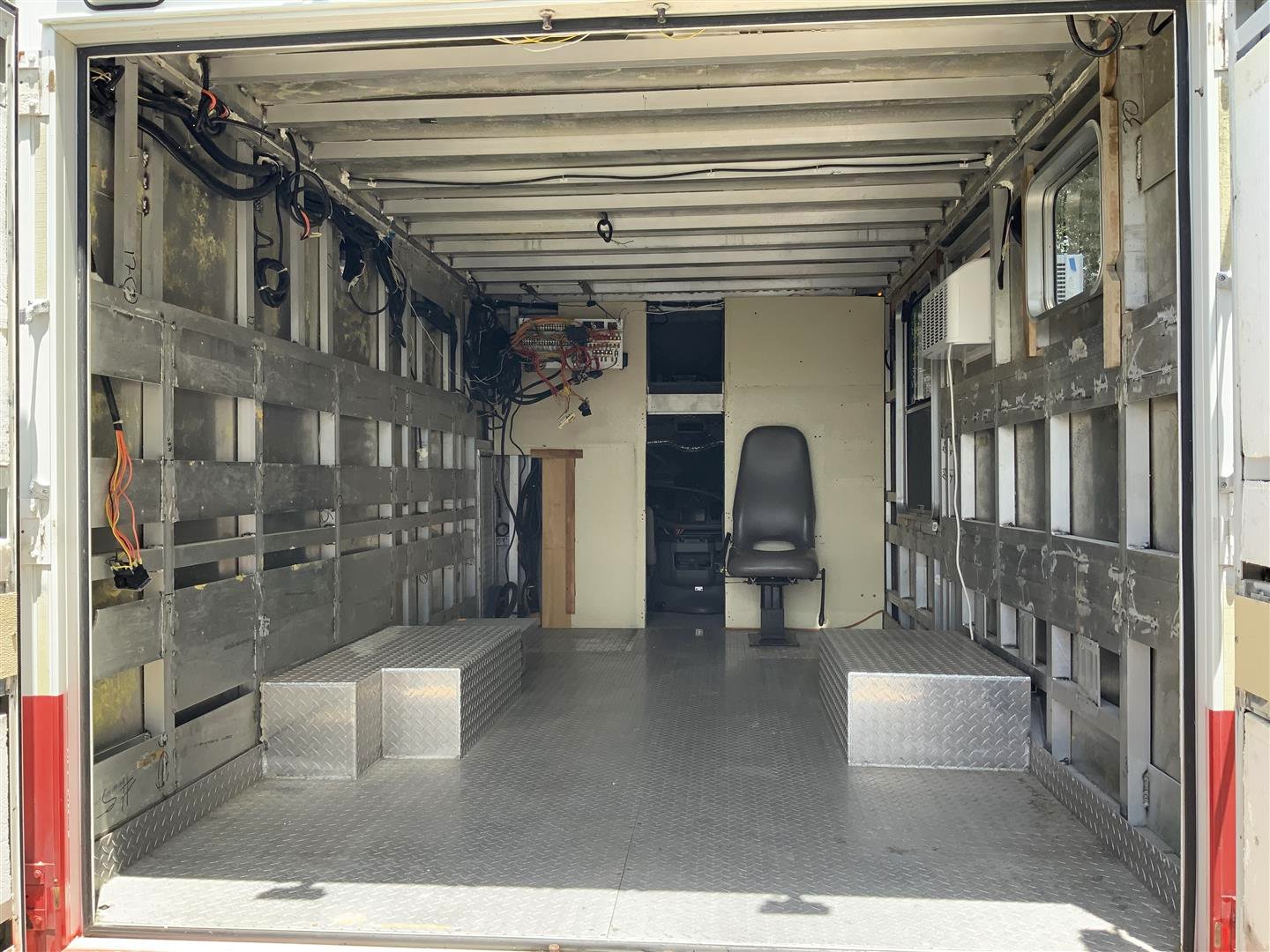 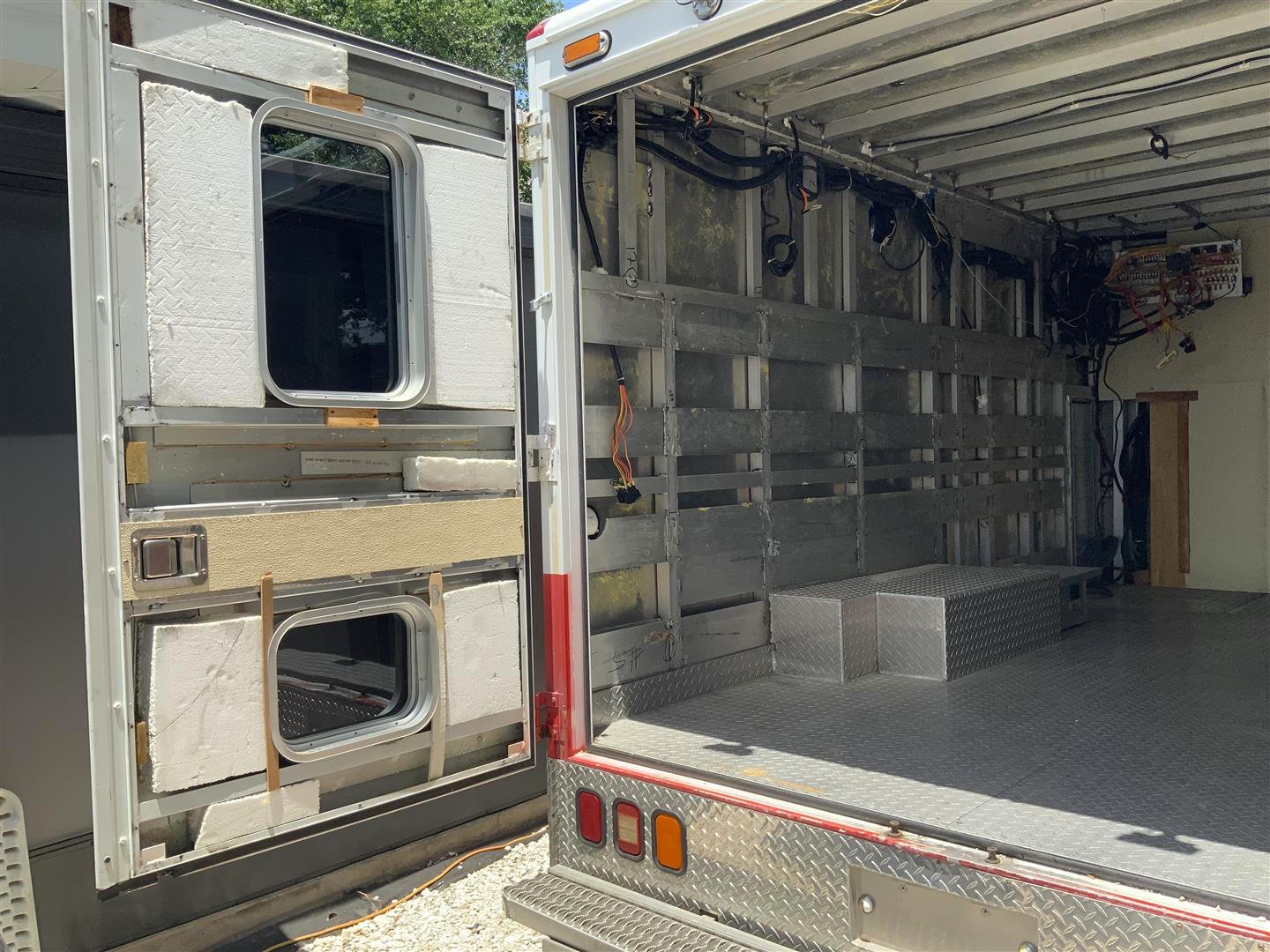 As you can see from the photos above, Much of the wiring loom is woven between the box frame and the outer walls, I'd really like to be able to insulate as much of the walls and ceiling as physically possible.. These cables are going to make that difficult. Plus I would also like to keep the cables accessible for any repairs/alterations & additions needed later on. Therefore did not want to bury them in the walls again.

I also wanted to remove all the cables and circuits that I don't need or had just been cut before I got the van. So off came all the cable protector sleeves, First I removed all the dead stuff, Then the few circuits I'm deleting,
Then finally one cable at a time I re-routed the cables to be free of the box & put it back on the board where it came from.

I do intend to create a cable/services tray around the top where walls meet ceiling. these cables can go in it, Along with new services I'm going to add. So for now they are just hanging on zip ties so the insulation can be done. 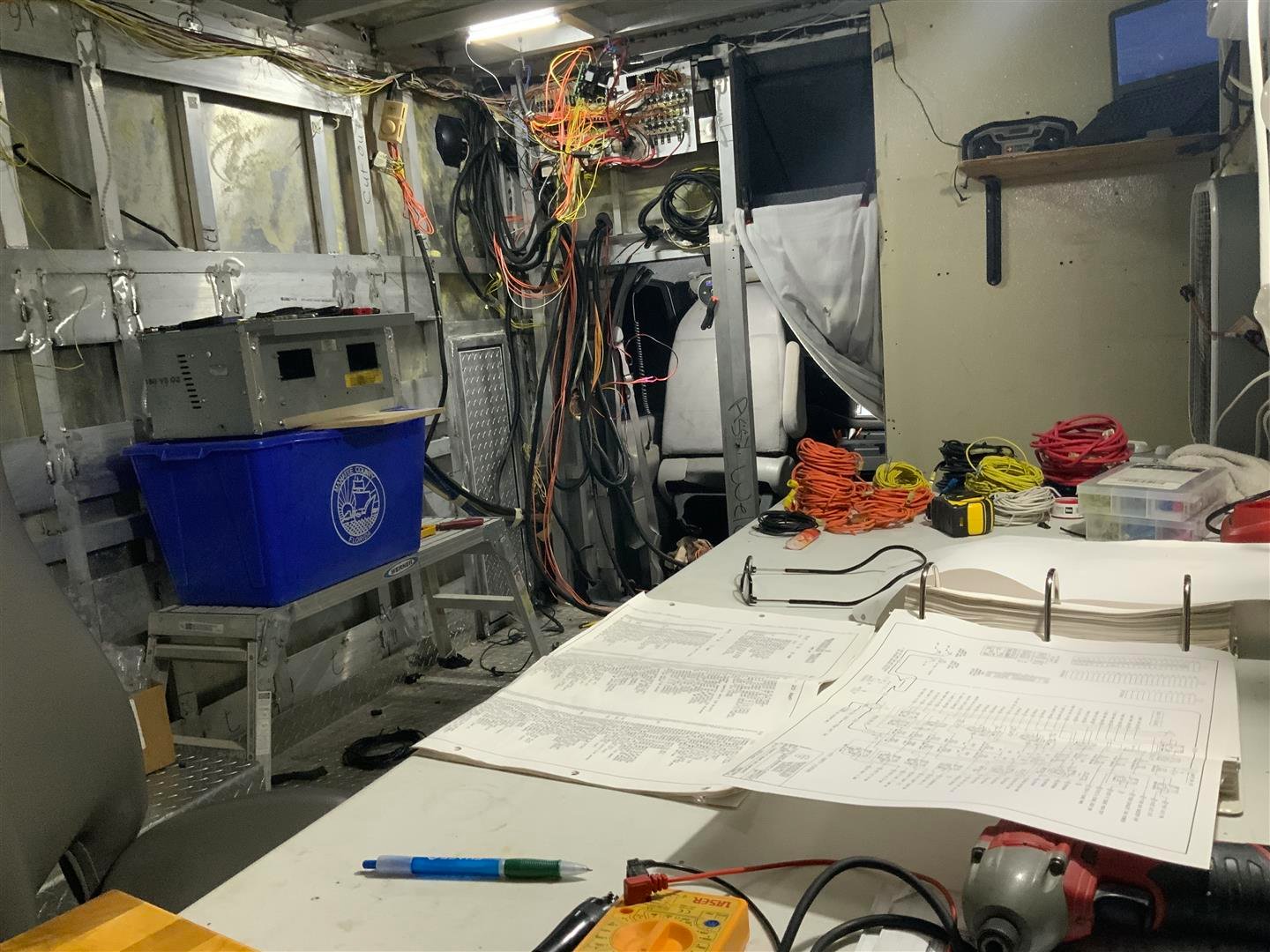 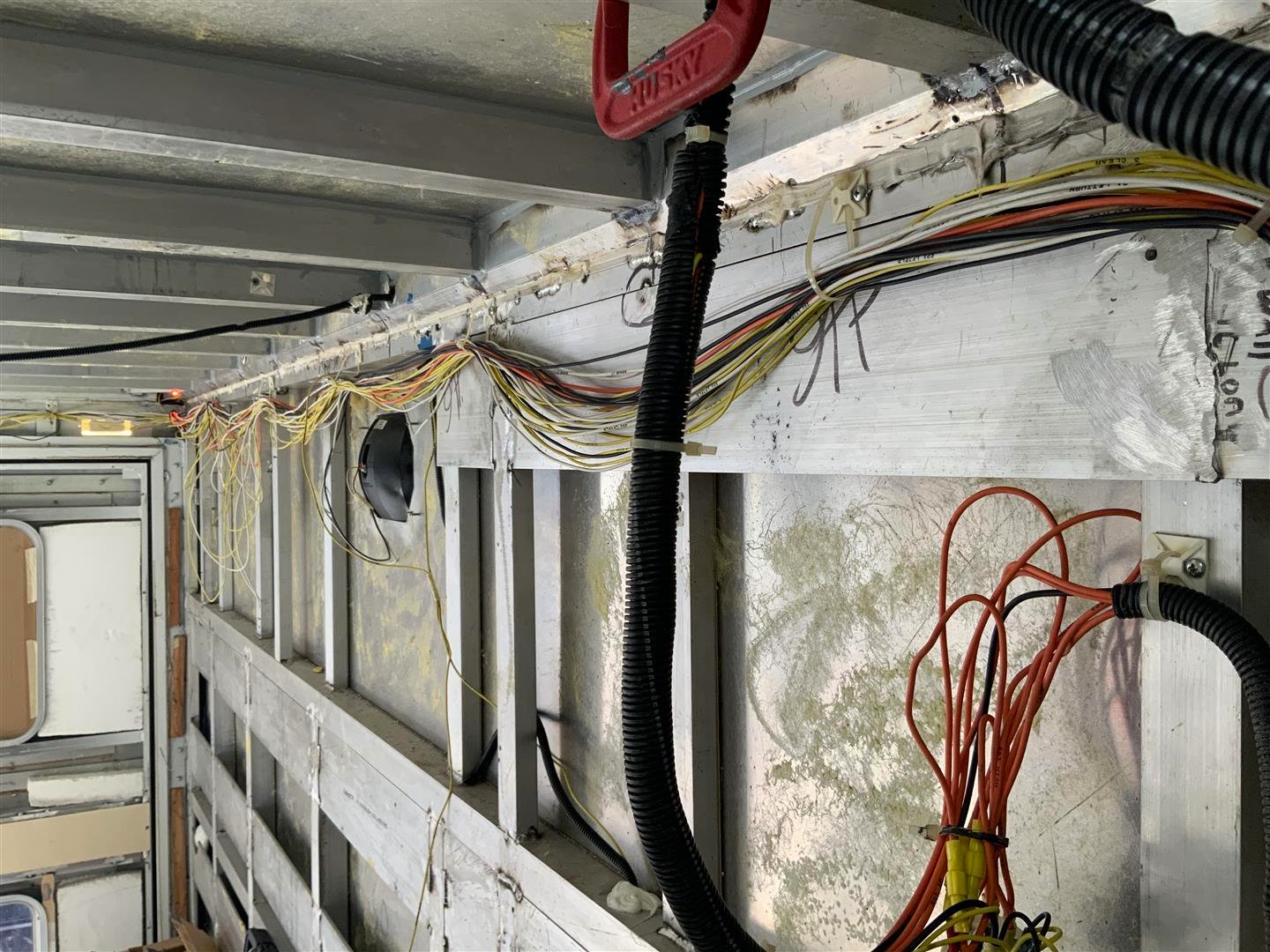 Looks like a rats nest now.. but will all fall into place during the build. 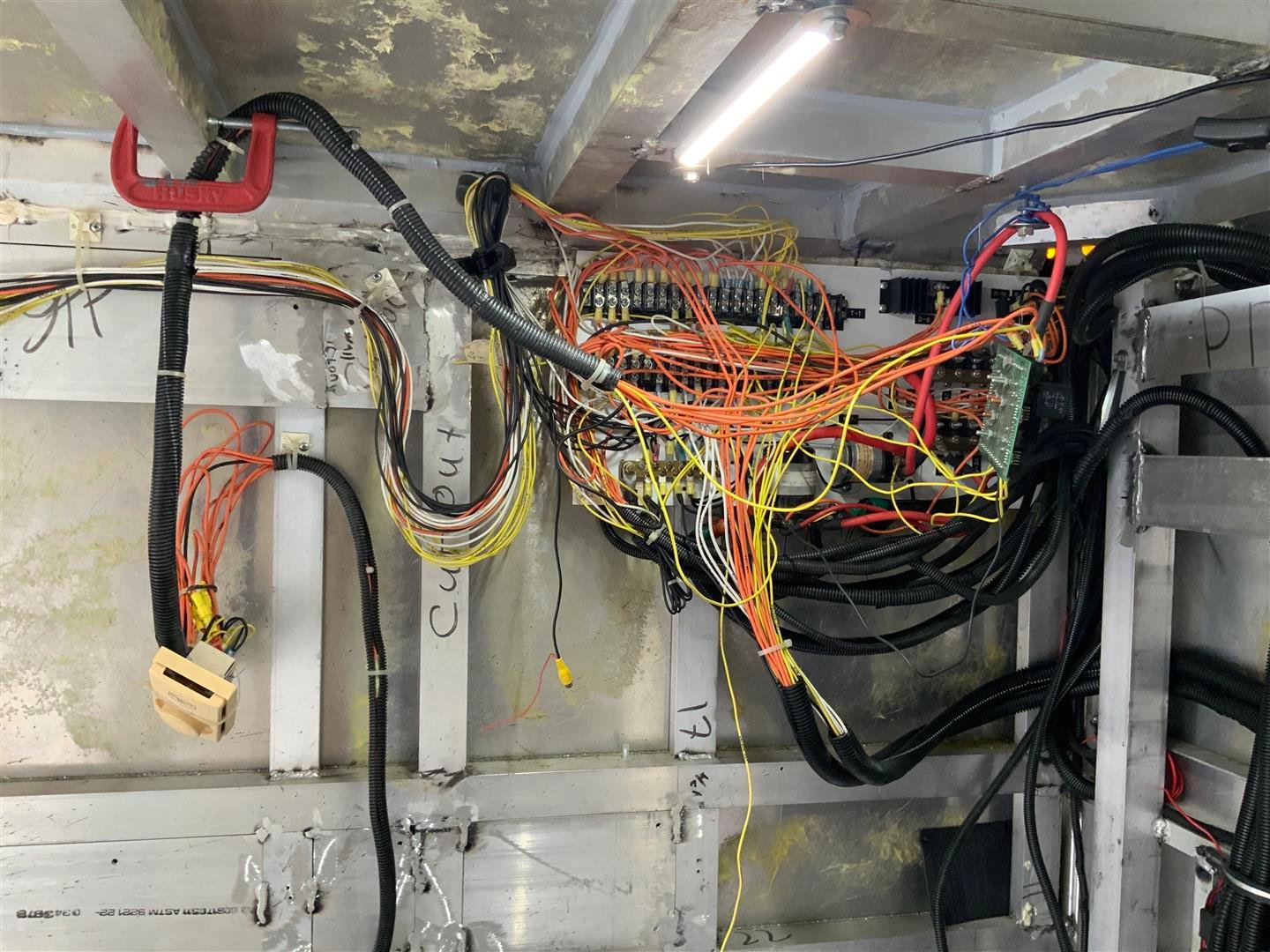 In quite a lot of areas the wall & ceiling outer skin is separating from the box frame. 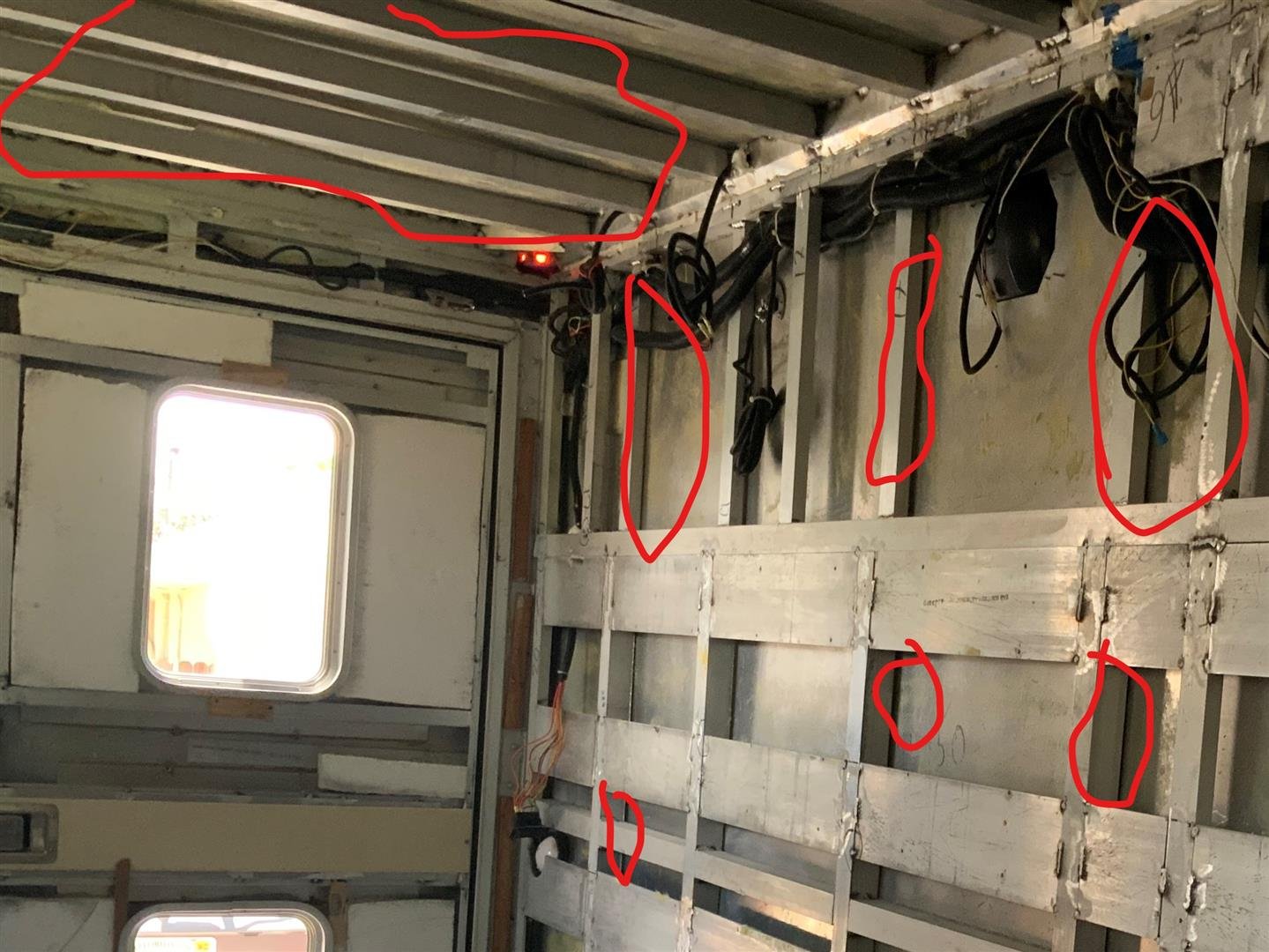 Can't have the walls falling off now can we!

Out with the Silkaflex.. squirted it between the roof panel and box beams, Then placed concrete blocks on the roof to pin it down good.
Let that dry for few days and then ran a bead of silkaflex along every edge of every beam to help hold it down.. 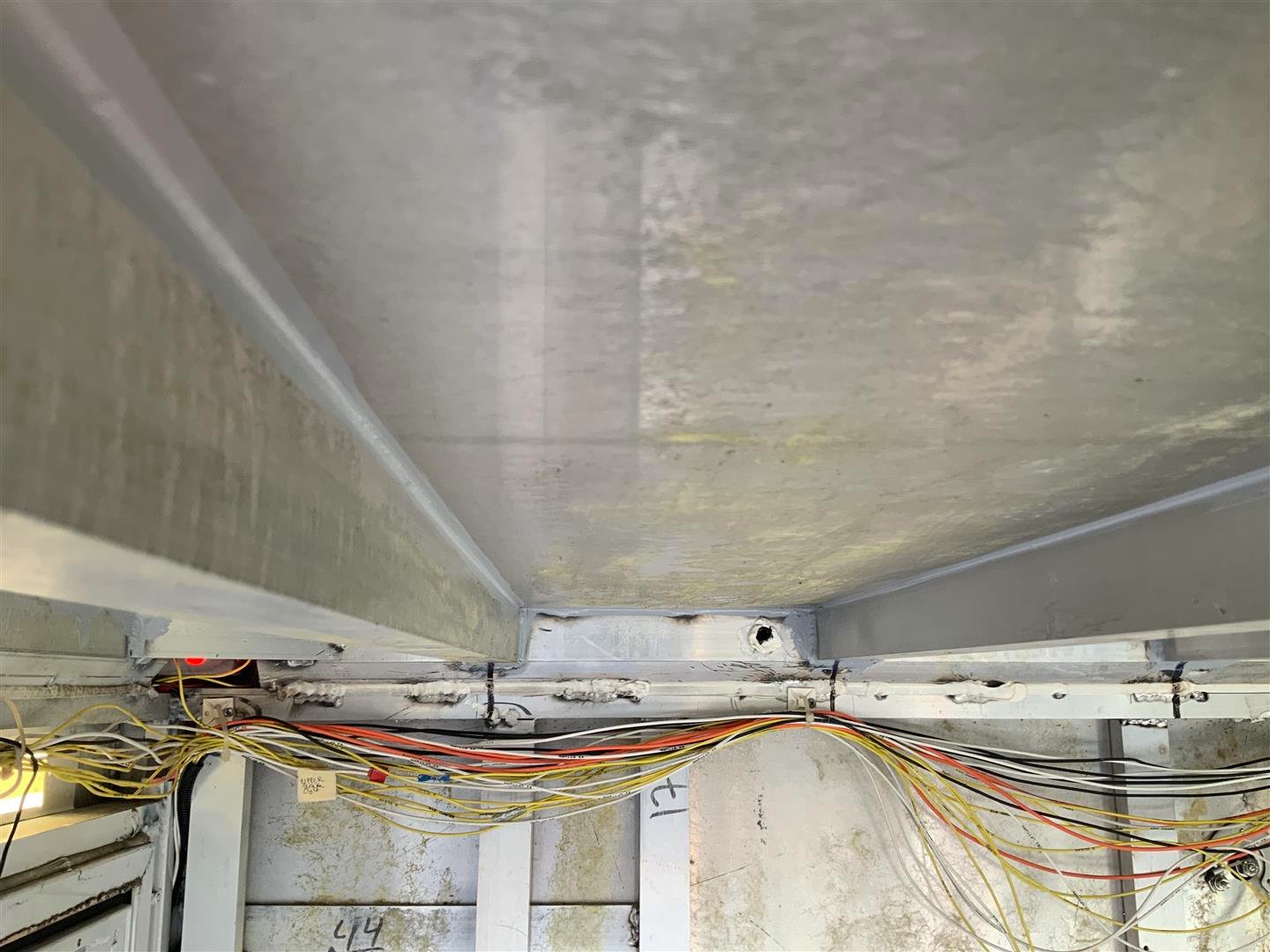 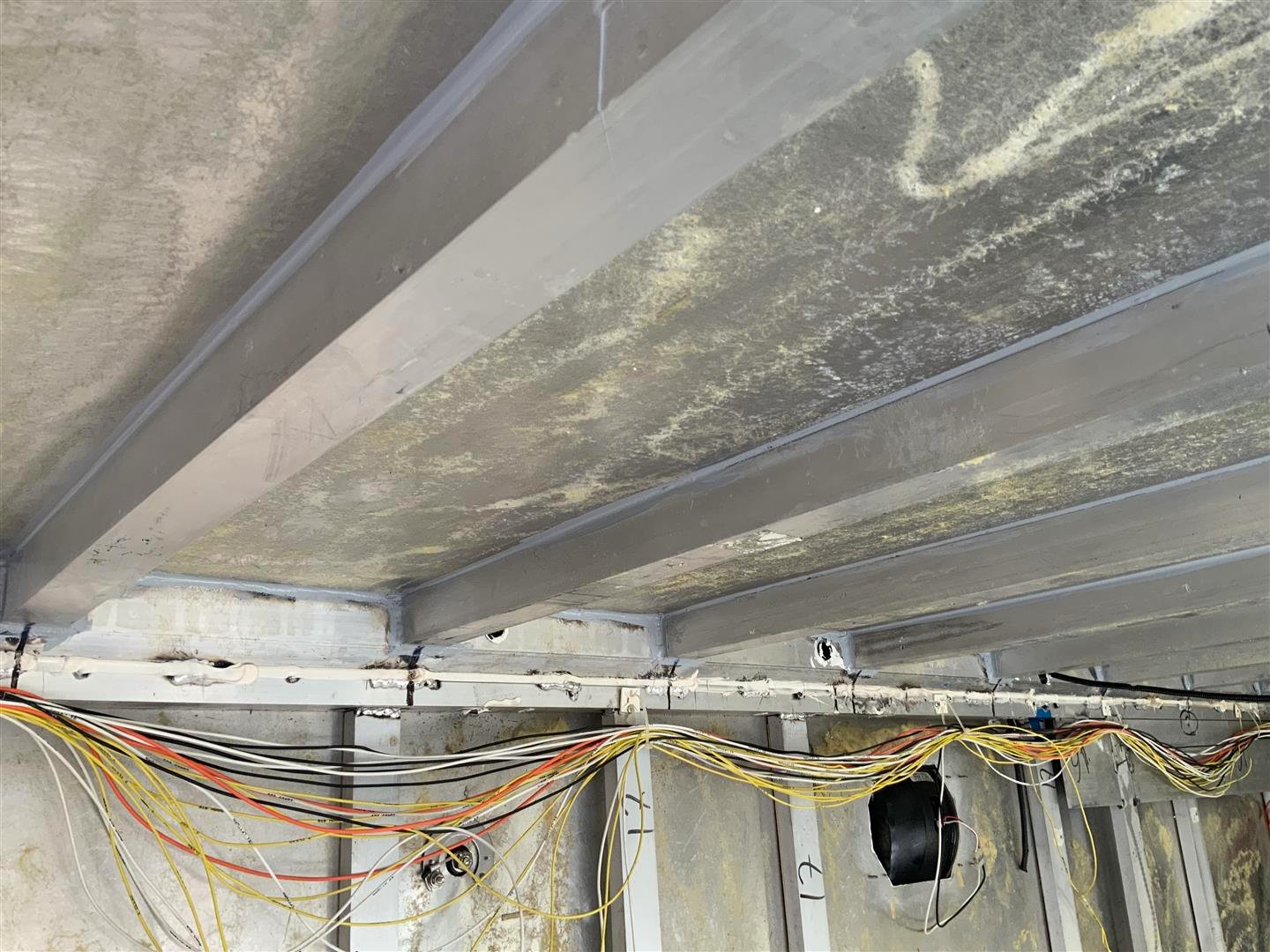 All worked great & Florida hot sun has not made it pop back up yet.

Still got the walls do same way. But for now I want to get on with fitting the max fans and skylight then get the ceiling insulated.
Top

Been doing a little more shopping and got all new led light fittings for the exterior. Couple of light bars for the front. Some mini light bars to replace the back and side scene lights.

The max fans came little while ago, as did the skylight hatch & the new door for the side. 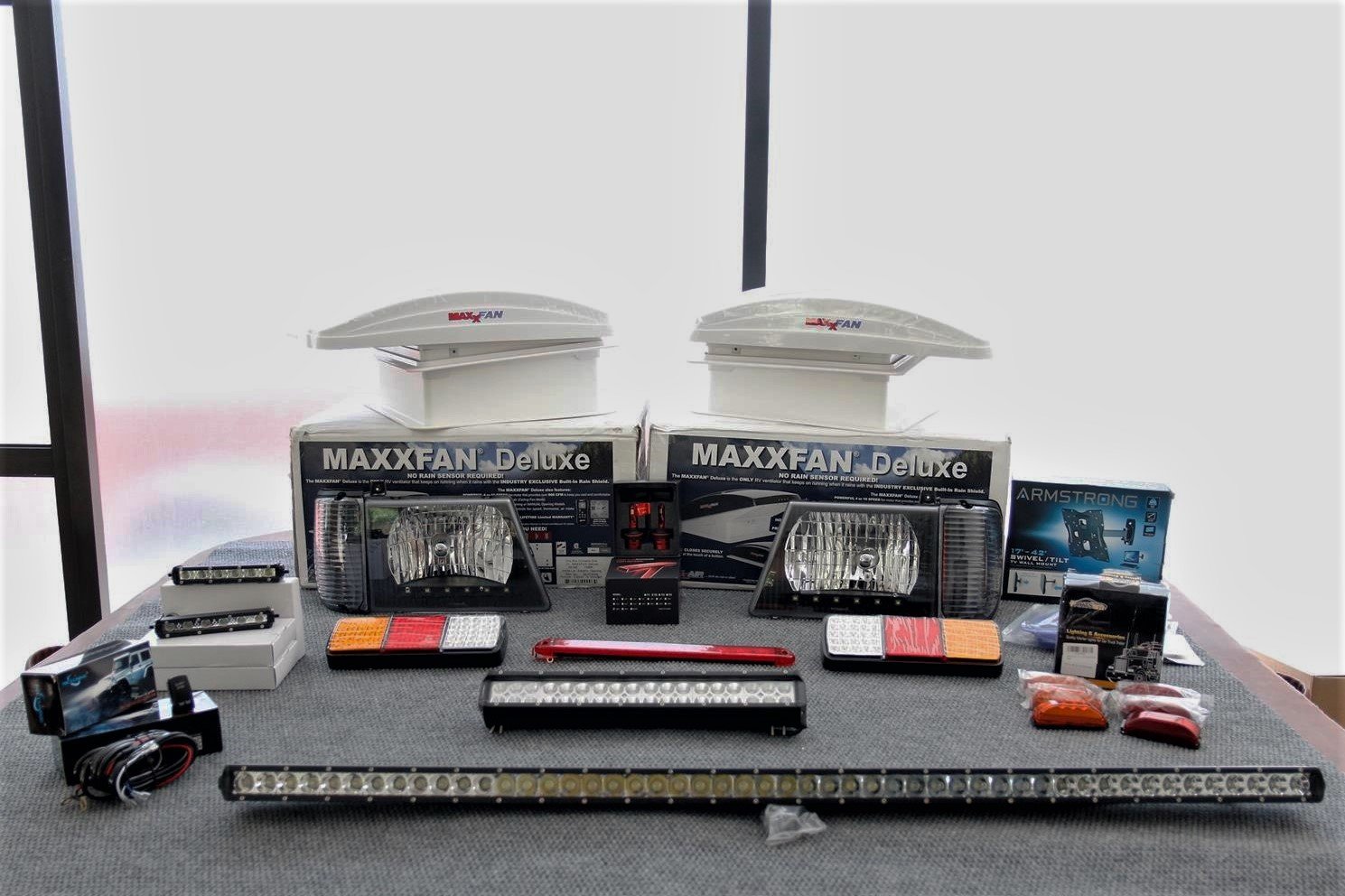 
Can't find a way to rotate pictures in portrait mode! 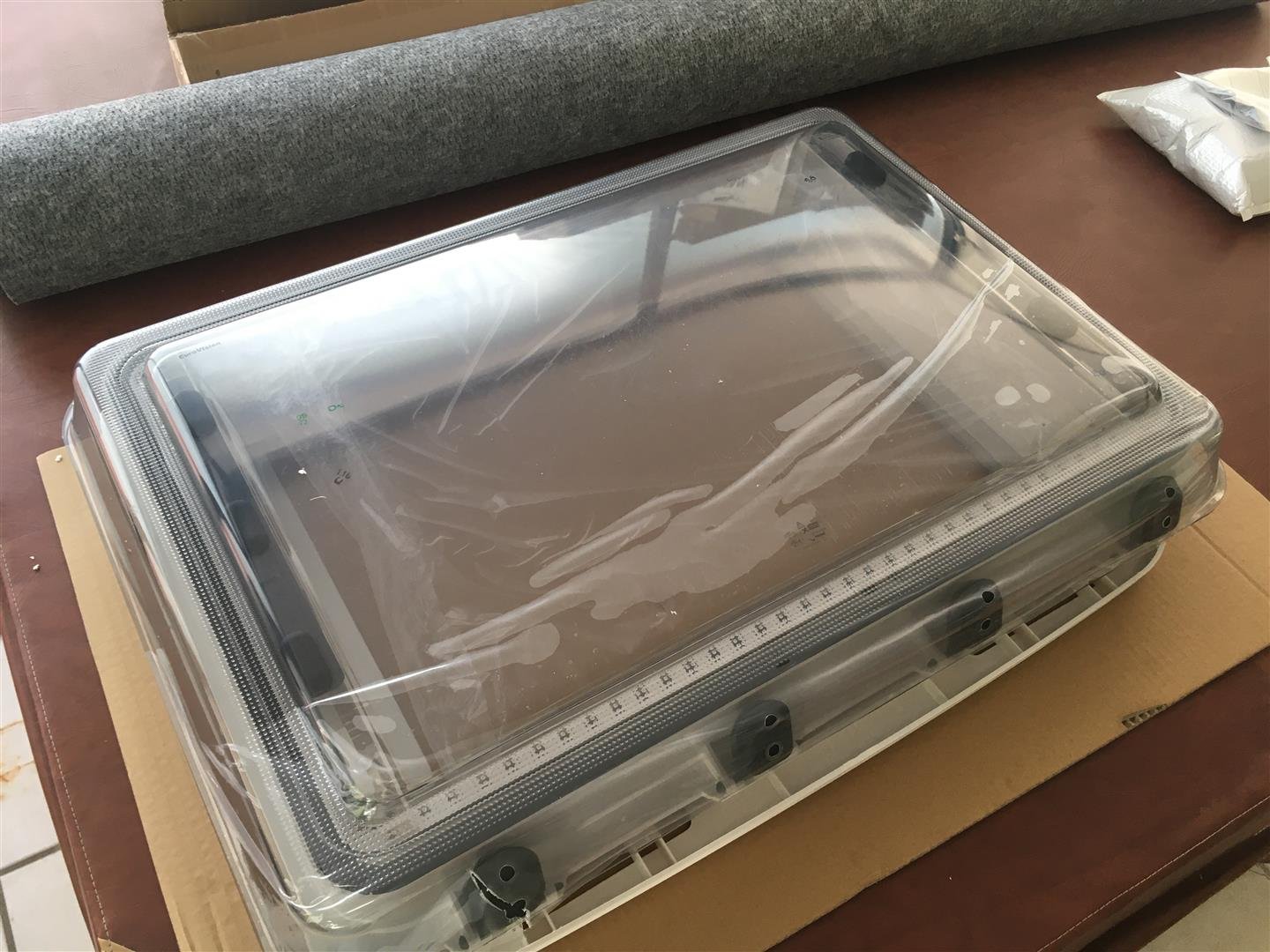